For many years, Republicans have been determined to privatize Medicare and Social Security or get rid of the programs altogether. So whenever Republicans talk about federal spending, they usually show a chart that looks something like this: 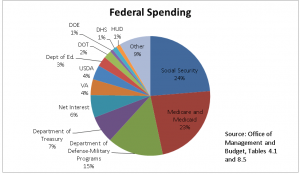 Notice that the two largest slices of the budget represent Social Security, Medicare and Medicaid, or what is often called “mandatory” federal spending. Thus, the chart would seem to indicate that most of the tax revenue goes toward healthcare and retirement for the elderly and the poor. Is it any wonder, then, that so many young people believe that the federal government is being “bankrupted” by payments to senior citizens?

However, most of the costs for Medicare and Social Security are not part of the general budget.

Since the programs pay for themselves, their budgets should be kept entirely separate from the general budget. To more accurately reflect reality, the federal spending chart should look like this: 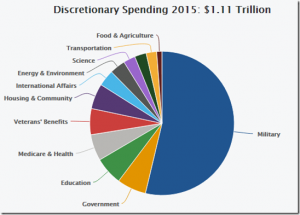 This chart represents the spending controlled by Congress and paid for through taxation. As you can see, in this chart, the majority of that spending is for our military ($824.6 billion, up more than 13 percent since Republicans have taken the reins of government) and veteran’s benefits ($78.9 billion). When Congress spends more on these items than it collects in taxes, it results in deficit-spending. The shortfalls result in borrowing from other sources – from other countries and from the Medicare and Social Security trust funds.

Despite their claims to the contrary, Republicans have been particularly good at deficit spending. Reagan nearly doubled the federal debt, increasing it by $1.9 trillion. George W. Bush increased the debt by $5.8 trillion. He also left his successor with two wars and the Great Recession resulting in more than $8.5 trillion of additional borrowing. And, in his first two years in office, Donald J. Trump has already doubled the deficit, increasing the debt by more than $1.2 trillion. And the 10-year cost of the Trump tax cuts will add an estimated $2.3 trillion more to the federal debt.

In order to reduce the debt, Senate Majority Leader Mitch McConnell says he wants to balance the federal budget by cutting payments to “entitlements,” aka Social Security, Medicaid and Medicare.

That would be akin to embezzling money from your employer to pay for your own spending excesses. The Social Security and Medicare trust funds are not Congress’s money!

None of this is to say that Medicare and Social Security don’t have their own problems. If changes are not made, it’s expected that Medicare will exhaust its reserves by 2028. Likewise, it’s expected that Social Security will not be able to meet its full obligations after 2034. But that does not mean that there will be no money left for the programs’ beneficiaries. It simply means that the payouts will be less.

And both programs could meet their obligations with a few tweaks.

Like all insurance programs, they should be governed by actuarial tables. When the costs go up, so should the premiums. Unfortunately, Congress has put limits on the amount of money the programs can charge for premiums. For example, FICA deductions only apply to the first $128,400 of an individual’s income. Social Security could be fixed by simply removing the cap. It’s that simple.

Similarly, Medicare’s impending problems could be solved by increasing the payroll deductions, by negotiating for better prices with pharmaceutical companies, or, better yet, we could improve outcomes while saving our government and our citizens trillions of dollars by moving toward universal health care.

And, here’s a radical idea: Maybe we could find additional money for these programs in the general budget by holding government contractors accountable. For example, the F-35 fighter jet program was $163 billion over budget as of 2014. A figure that continues to climb faster than the plane.

It’s nearly double the annual revenue collected through the Estate and Gift Tax ($13 billion). It’s nearly half of the entire budget for Homeland Security. And, in more human terms, it would feed 1.6 million American families of four for an entire year!

Now imagine what would happen if Democrats proposed spending $24 billion to help the working poor or to rebuild our crumbling infrastructure. Teapublicans would cry, scream and hold their breath. They would fill the airwaves and the newspapers with paranoia. They would say that Democrats were mortgaging our children’s future. Yet they were willing to spend $24 billion on nothing…absolutely nothing.

Worse yet, 144 Teapublican Congressional Representatives and 18 Senators voted no on the bill to reopen the government and to prevent default! That’s 162 Teapublican votes to pour even more money down a rat hole. 162 votes to send the US government into default…risking a worldwide economic calamity!

And what might that have accomplished? Most economists feared that a failure to increase the debt ceiling would not only downgrade the rating of US bonds, it would create a collapse worse than the Great Recession of 2008 and 2009…maybe worse than the Great Depression. To put that into perspective, in a research paper for the Federal Reserve Bank of Dallas, economists David Luttrell, Tyler Atkinson and Harvey Rosenblum calculated that the total cost of the Great Recession to the U.S. was on the order of $6 trillion to $14 trillion. The larger figure is roughly one full year of U.S. economic output and nearly equal to the entire federal debt!

Do you still think the Republican Party is the champion of fiscal responsibility?

You see, the increase in spending in 2009 following the economic collapse of 2008 should rightfully be attributed to the Bush administration. That’s because the 2009 deficit was the result of a spending bill, including the Troubled Asset Relief Program (TARP), authorized by Congress in October of 2008 and signed by President Bush months before Obama took office. In fact, spending in the first year of any administration is always the result of the previous administration. Properly credit 2009 spending to Republicans, and you’ll discover that President Obama has been responsible for the lowest spending increases since Eisenhower. Similarly, he is responsible for the most rapid cuts to our deficit in more than 50 years!

So why do Republicans continue to place the blame on Obama? First, it’s a matter of political convenience to portray Obama as a “tax and spend” liberal. Second, the narrative is relatively believable since government spending skyrocketed during the first year of the Obama administration. Third, the media has done a very poor job of countering Republican misinformation.

In order to truly understand the federal debt, you have to look at the history of US borrowing.

Following the Revolutionary War, the US debt stood at roughly 35 percent of Gross Domestic Product (GDP). It again reached that level following the Civil War. In both instances, the debt was brought down by a combination of increased revenues and spending restraint. During WW I, the US debt again rose to approximately 35 percent of GDP. Before it could be paid down, our economy collapsed leading to the Great Depression. That was quickly followed by WWII. The two events caused the debt to soar to more than 117 percent of GDP. But, through a combination of post-war prosperity and income tax rates of up to 91 percent during the Eisenhower administration, the debt was again brought under control.

By the end of the Carter administration, the national debt had been reduced to 32.5 percent of GDP.

President Reagan’s expansive military spending during the Cold War once again caused the debt to soar, reaching more than 66.1 percent GDP. Under Clinton, it was reduced to 56.4 percent of GDP. Then, under George W. Bush, two wars (one of which was a war of choice) and lax government oversight led to the Great Recession – the worst economic calamity in nearly 80 years. At the same time, a Republican-led Congress cut taxes (and, therefore, revenue), particularly for the wealthy.

President Obama inherited a debt of more than 84 percent of GDP, along with a worldwide economic collapse, double-digit unemployment, spiraling health care costs, two wars estimated to have cost more than $6 trillion, a Congress that refused to rescind the Bush tax cuts, and a uniquely obstructionist Republican Party.

All of this was roughly the equivalent of combining the costs of World War II and the Great Depression without the primary mechanism needed to reduce the debt – taxes!

President Obama was left with few choices. He had to stimulate the economy through loans and tax cuts in order to put people back to work. This led to reduced revenue. He had to wind down the war of choice in Iraq as quickly as possible. He needed to stabilize the war in Afghanistan that had been allowed to languish under Bush at a cost of $1 million per soldier per year. Moreover, since few Americans had been asked to sacrifice for the wars in Iraq and Afghanistan, unlike World War II, they felt no need to pay for the wars through increased taxes. Indeed, even though federal income taxes were at a 50-year low, extremists funded by billionaires created the TEA (Taxed Enough Already) Party.

All of this led to the growth of our debt, which now equals nearly 102 percent of GDP.

Certainly, this debt is of great concern. But it’s not the short-term crisis Teapublicans would have you believe. (It’s the equivalent of a family earning $100,000/year holding a $102,000 mortgage.) And, without modest tax increases, there are few ways to reduce the debt.

One is to grow the economy, and according to most economists, including Lloyd Blankfein of Goldman Sachs, the economy is on the verge of significant, sustained growth if the nitwits in Congress would just get out of the way and stop dragging us from one self-inflicted crisis to another.

Two is to make cuts without adding to unemployment. (For example, we squander tens of billions each year on weapons systems that our military doesn’t even want, but Congress refuses to defund them because doing so would cost jobs.) And, once the economy shows sustained growth, programs such as food stamps can be cut – especially if we raise the minimum wage to reduce the large number of working poor who have little choice but to rely on government assistance.

In summary, contrary to what Teapublicans would have you believe, our national debt is not Obama’s debt. It’s the result of decades of wars, tax cuts, regulatory indifference, a struggling worldwide economy, out-of-control health care costs, greedy corporations that off-shore both jobs and profits, and a dysfunctional Congress that not only fails to help the economy. It makes decisions that are actually preventing economic recovery!

As a matter of fact, the Tea Party seems determined to force our nation into default. And, like the debt, they would have you believe that it’s all Obama’s fault.